With my ordination ceremony coming up in less than a week, I’v been thinking a lot about prayer, and what I do in my daily devotionals.  Hestia is who I call to everyday.  She’s who I call to each morning, sometimes with my daughter and sometimes alone, and light her a stick a incense, so that she is receiving the first offerings of the day.  The smoke carries my prayers to the gods, and she carries my offerings to them as well. 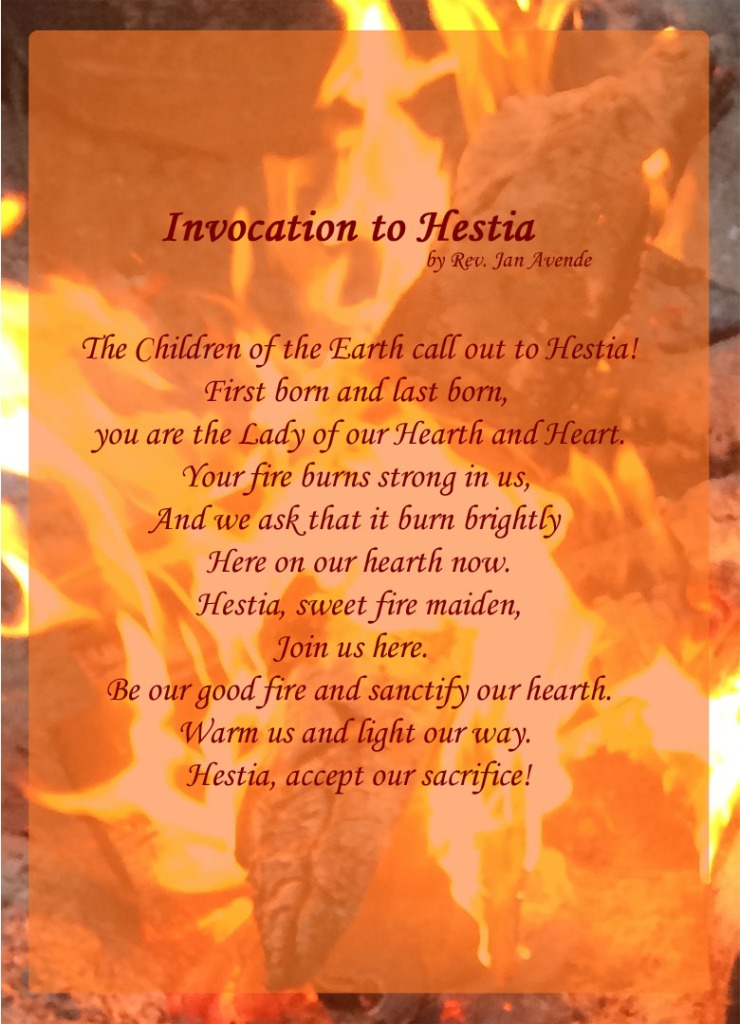 Something that has been on my mind a lot lately is the difference between being a devotee and having a patron, and where they overlap. I tend to prefer saying “I am a devotee of ____” rather than “____ is my patron.” I think a lot of people probably use these terms interchangeably, and there’s nothing wrong with that. Often when I’m speaking in general conversation I will say that Poseidon is my patron because that is more understandable in most pagan circles than calling myself a devotee.

It is a small semantic difference I think, but a lot of it in my brain comes down to who belongs to who. When I say I am a devotee what it feels like I am saying is “I belong to Poseidon.” The line of power flows from me to him, and when things are unbalanced in our relationship, they weight towards him. When I say I have a patron what I feel like I am saying is “Poseidon belongs to me.” The line of power flow from him to me, and when things are unbalanced in our relationship, they weight towards me. I think another part of it for me is that there is little bit of fear laced in the idea of having a patron. Or maybe just with having Poseidon as a patron. The ocean is huge, unfathomable, and powerful. I don’t particularly want all of that focus on me. It is an awesome power to be able to tap into, but it is also treacherous. There is perhaps a likelihood that he is my patron in all of these ways that I shy away from, but I am still, after all these years, surprised at it.  I can say that I have no doubt that he supports me.  I have no doubt that he has been an integral part of my development in my spiritual life.  I have no doubt that he walks beside me and that I will continue to honor him.

The nature of our *ghosti relationship stays pretty even, and pretty balanced. There is give and take. I certainly feel like he looks out for me, has taken a special interest in me, and walks with me on my path. I honor him, I worship him, I make offerings to him, and I call on him when I have a need. Our relationship has certainly gotten more balanced than I think it used to be. I used to feel like he was demanding more of me than I was willing or able to give. I think most of the time now we’ve reached a comfortable balance. I am willing to give more, and he is willing to ask less, though he is still a demanding god. I think our relationship is at as comfortable a place as can be expected between a human and a God of the Sea.

So, Thom and I closed on our house this week.  First time homeowners, yeah!  It’s a been a crazy ride, and we’re so happy and excited.  To prepare of the move, I’ve had to think about how I wanted to handle some of the religious and spiritual things.  I wanted to do something to mark the “claiming of the land” or similar.  Something to say “this is our new home” in the context of my path.  What I eventually decided on, after much deliberation and feeling at a loss for words, was to douse all of my flames the night before, and then light them again at the new house.  My hearth flame would be the first thing across the threshold.

I currently am the tender for the Hellenic Kin’s flame in ADF.  So, I didn’t want to douse that one formally since it belongs to the wider community, so I gave it into the care of MJD (complete with prayer to say), who is keeping it for a few days for me until we’re settled.  The rest of my flames I lit Monday evening.  Called to Hestia as I always do, and made offerings.  I said how I’d be extinguishing the Fires here, and how I looked forward to rekindling them in our new home.  Then I doused them all in the water I had purified earlier in the ritual.

It was really weird to have a night in that liminal space, without the fires of my hearth.  Even weirder was to wake up the next morning and not have a fire as I did my morning devotional.  After we signed all the paperwork and got the keys, Thom and I drove over to our new home.

I called out to Hestia and kindled her flame on the front porch.

Then I walked, lantern in hand, across the threshold, and brought the Fire into our home.  It was powerful.  I walked the flame through each room of the house, inviting Hestia to warm and brighten each space for all those who live or visit there.  I called out to the Agathos Daimons, the house spirits, and made offerings to them.  I let them know that we’d be living there with them, and to be welcome around my Fire, and that I’d make good offerings to them.

I then walked the perimeter of the property with the lantern and with barley.  I called out to the spirits of the land and made offerings as I walked.  I invited them to stay and be welcomed by my Fire, but also let them know that if they chose to leave their would be no hard feelings, and they should feel free to disperse.

Then I went into the kitchen, to the place I had already chosen would be the household altar, and set up my simple flame, well, and tree/omphalos.  I thanked Hestia for joining me in this new home and thanked the spirits of the house and the land for listening to my words.  I let them know more offerings and prayers would be forthcoming through then coming days and months, and that I looked forward to building a relationship with them.

It was a very powerful experience.  Moving from the light of my home, to the darkness of between, and then back into the light at our new home.  We’d done a couple walk throughs during the process of buying, and so we were familiar with the layout and everything.  But it was amazing, the way the addition of my hearth goddess and her flame, and introducing myself to the spirits there really made that big empty house feel like home.